50 years after the synagogue was converted into a fire station, the building was partly reconstructed in 2003 under the supervision of architects Ada and Reinhard Rinderer and re-opened as the home of the tonart music school in 2004. In a simple and decent manner, the former prayer room was returned to its original cubature and the high windows with their oculi and the former women’s gallery were partly reproduced. With awareness of the building’s previous use as a synagogue, the hall, named Salomon Sulzer Auditorium (www.salomonsulzersaal.at) is now used for high-grade cultural events and intercultural relations.

The former synagogue in Hohenems
The synagogue, erected 1771/1772 according to the plans of Peter Bein, the baroque master builder from Bregenzerwald, and converted into a fire station in 1954/55, occupies a central role within the Jewish quarter in Hohenems and also in the discussion about dealing with this history. The imposing cylindrical vault construction of the hall represents an early and unique example of a late classicistic baroque rural synagogue.

The furnishings in the interior of the synagogue corresponded to the general guidelines for synagogues of this time, but boasted particular characteristics: The ceiling paintings were not ornamentally abstract paintings as usually found in synagogues, but rather figurative representations. Themes were the creation of light (above the recital lectern in the east of the synagogue), the revelation of Mount Sinai and a sea of clouds with flashes of lightning in the centre of the synagogue. On the north and south walls of the synagogue, there were five medallions with representations from synagogue culture.

Initial modification of the synagogue took place between 1863 and 1867 according to the plans of the Swiss architect Felix Wilhelm Kubly. The changes included the erection of a new holy shrine and a pulpit, new seats for the rabbi, the choirmaster, and the community councillor, and the replacement of the lectern from the middle of the room to a podium in front of the Torah shrine. A new gallery was built for the choir and the harmonium, which was sponsored by Salomon Sulzer.

Destruction
Although the synagogue was spared of infringement in the pogrom on the night of November 9, 1938 (“Night of Broken Glass”), after the enforced disintegration of the Jewish community, the community of Hohenems carried out the long awaited takeover of the building in September 1940. The plans for the modification of the synagogue were not carried out during the period of the Nazi regime. By November 17, 1938, all objects of ritual in the synagogue had already been confiscated anyway. A detailed documentation of inventory lists the objects which have since gone missing.

After the return of the building to the Jewish cultural community in Innsbruck from the French administration in the years after the war, the community in Hohenems decided to buy the building of the former synagogue and convert it into a fire station. By the time of the conversion in 1954/55, all elements which were reminders of the building’s function as a synagogue had been destroyed. With the installation of a hollow block ceiling the former prayer room was divided into two floors. The ceiling fresco and parts of the arched ceiling were removed as were all sacral elements of the outer façade.

The arched windows as well as the oval windows positioned above them were replaced by cornered ones. Since then, three garage doors have dominated the east façade, where once an apse emphasized the torah shrine inside. Instead of the belfry, a hose tower was installed measuring the entire height of the building. The building was used as a fire station until 2001. 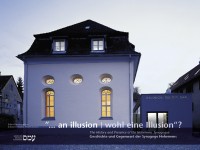 The book about the synagogue: 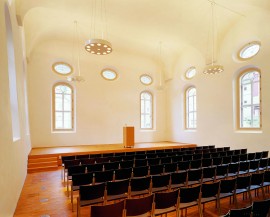