The Jewish quarter of Hohenems is known far beyond Vorarlberg as one of the few complete urban ensembles of Jewish history. In 1996, the national authority of preservation placed a preservation order on substantial parts of the Jewish quarter. Along with the former Christengasse (Christian’ Lane), now Marktstrasse (Market Street), the urban core of Hohenems is formed by the former Jewish quarter. The historical status of construction in the town centre is a cultural and historical testimony to the centuries long coexistence of two traditional communities, Christian and Jewish, in this region.

Today’s existing buildings in the Jewish quarter date back to the latter part of the 18th century and the 19th century. All buildings which once served religious or social functions within the community – synagogue, Mikvah (ritual bath), schoolhouse and care centre for the poor and elderly – still exist within the quarter, along with the residential homes of Jewish families.

The Jewish quarter reflects the social situations of the Jewish people in Hohenems. Until the end of the 18th century, they were responsible for trade and money lending: municipal functions which were practised in rural areas. Earl Kaspar brought the Jews into his dominion for the purpose of these tasks. Many of them were bourgeois-oriented and supported the development of an urban society which also established municipal forms of living in rural areas with the industrial revolution from the middle of the 18th century.

Christian families had already moved into former Jewish houses by the 19th century, just as Jewish families had lived in so-called ‘Christian houses’ in the former Christengasse (Christian’s Lane) from 1810 onwards. In many buildings, Christian and Jewish families lived under one roof for decades.

Beginning in the second half of the 19th century, many members of the Jewish community in Hohenems emigrated from Hohenems to the economic centres in nearby Switzerland, the cities of the imperial and royal ‘Donaumonarchie’ (monarchy of the Danube) or overseas. In 1938, only a few of the houses in the Jewish quarter were in Jewish possession. Public buildings were confiscated by the Nazi regime community administration and handed back in 1945. After 1945, many Jewish DPs, most of them Eastern-European Holocaust survivors, lived in Hohenems and Bregenz for a few years. But after their emigration to the US, Israel and other European countries, no Jewish community life was established again in Hohenems. The Jewish community of Tyrol and Vorarlberg today has its center in Innsbruck. Nevertheless, in Vorarlberg the Jewish population today is larger than before 1938.

Heritage as a challenge

Like in many other historical towns, by the 1970s many buildings had started to deteriorate. Their demolition was expected when landlords packed old houses with migrant workers, mostly coming from Turkey. But in the end of the 1970s, there was a growth in public interest in historical heritage as well as the old Jewish quarter and its history in Hohenems, which was elevated from a market town to the legal status of a city in 1983. Parallel to the set up of the Jewish Museum of Hohenems and the renovation of the Heimann-Rosenthal Villa in the late eighties, some houses in the former Judengasse (Jews’ lane), now Schweizer Strasse, were renovated under private ownership.

Since 1994, the museum has consistently confronted the question of how to develop the Jewish quarter through numerous projects (project series ‘Ein Viertel Stadt’ – ‘A Quarter of the Town’). In 1998, the authorities of the city of Hohenems set up a team to compile, in cooperation with the Jewish museum, ideas and concepts in town planning for the future development of the Jewish quarter in Hohenems. In the summer of 1998, the team submitted a catalogue of possible actions with respect to the future use of this culturally and historically important part of the town.

By the end of 1998, a group of five architects (Marcel Meili, Roland Gnaiger, Hermann Czech, Peter Märkli, Gerold Wiederin) were commissioned to elaborate on town planning expertise for future development in the historical centre of Hohenems. The main focal point of this expertise was the handling of the ‘Jewish quarter ensemble.’ The final report of this study was presented to the public at the beginning of 2001.

Restoration
The return of the Jewish history into the presence of the town brought an increasing interest in historical built heritage too. With productive consequences not only for the Jewish Quarter but the whole center of the town. After long years of public debate and city planning in 2016 a new design of the pubic space in the Jewish Quarter and the former Christian’s Lane, the Market Street, was implemented. Since 1996 many historical buildings have been restored in close cooperation with the Federal Office of Preservation and brought back to life, mostly on private initiative or public-private partnership. Among the most significant were the restoration of the Elkan house by Gerhard Lacha and und Cornelia Lacha – de Boer, the Hohenems synagogue by Gerhard Lacha and fellow partner, the Kitzinger house by the Amann family, the Jewish Poorhouse by Markus and Jessica Schadenbauer, the old Jewish School and the Mikvahby Gerhard Lacha and the Brettauer house by Gerold Ulrich and Andrea Gerstel. In October the new urban design of the streets and squares in the Jewish Quarter was openend to the public.

Houses in the Jewish Quarter ► 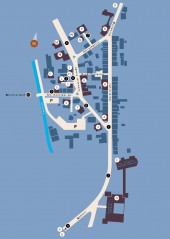