In the second half of the 19th century, the Jewish school in Hohenems became symbol of the controversial political-cultural cooperation across cultural and denominational boundaries. In the schoolhouse, erected by the Jewish community between 1824 and 1828, an educational institution evolved that enjoyed an excellent reputation far beyond Hohenems.
From the end of the 18th century, Jewish children in Hohenems were taught at the German-language “normal school.” Henceforth, the school was also to meet the increased educational requirements of an internationally intertwined community. The liberal social climate in Hohenems around 1850 paved the path for institutions such as the Café Kitzinger, the choral society “Frohsinn”, and eventually the Jewish school to become places where Jews and Christians would meet on an equal footing, at least for a while.

“Höhere Bürgerschule”
In 1851, the school was upgraded to become a “Höhere Bürgerschule” for boys and girls (a “Knabenbürgerschule,” for boys only, was established by the much larger Christian political community of Hohenems only as late as 1911, more than half a century later). In addition to traditional subjects such as German and arithmetic, French, Italian, bookkeeping, economics, history, geography, and, naturally, Hebrew and religion were taught. Knowledge of several languages was a matter of course. In 1859, the school instructed 74 pupils. In 1862, Moritz Federmann from Bohemia joined the teaching staff. He would teach there for 51 years, soon as senior teacher and headmaster. Federmann, a bachelor, held numerous honorary positions in the Jewish community, but also in organizations such as the Austrian Alpine Club. Thanks to him, the school would maintain its good reputation in the country for many years.
The school superintendents—usually Catholic clerics—consistently evaluated the school highly favorably. As a result, the school also featured many non-Jewish teachers. Moreover, numerous non-Jewish children, too, attended the school, which was a highly unique situation in the 19th century. Between 1861 and 1896, a total of 134 Catholic (among them 28 girls) and 108 Protestant pupils (among them 63 girls) attended the school.

The school’s closure
Its success could not prevent this liberal project from eventually failing before World War I. In 1896, the Vorarlberg State Diet prohibited Catholic children from attending the school; Christian-Social anti-Semitism was gaining ground. Additionally, since 1860, the Jewish community had been shrinking as a result of emigration; hence, the number of Jewish pupils was on a continuous decline as well. The school closed in 1913. Three years later, Moritz Federmann passed away. In 1918, the market town made an attempt at contesting the Jewish community’s title to the school building based on an expert opinion by attorney Otto Ender, who soon thereafter became governor of Vorarlberg. Yet, the building’s “Aryanization” occurred only after 1938. The Jewish school building was restituted after the war, then resold, and remained for a long time property of the market town, which, from the 1970s onward, accommodated labor migrants in this building. Following extensive discussions regarding the building’s future—in 1980 it was also a possible seat of a Jewish museum—the Jewish School was eventually lavishly renovated in 2009 by the “Jüdische Schule KG,” funded by a private initiative; today, it houses the Restaurant Moritz and the Federmann Auditorium. 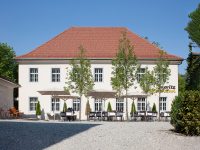