In July 2008, ten years after the first reunion, more than 120 descendants of Jewish Hohenems families from around the world met once again. Participants from the USA, Switzerland, Australia, Canada, England, Italy, Belgium France, Austria, Israel, Germany, and Liechtenstein gathered for four days in Hohenems.
Touching encounters ensued: between family members who had never met before and between people of different nations and creeds, between descendants and interested people from the Lake Constance region, between families who cling to their common origins and the connection to this Heimat, yet, whose members have become citizens of the world long since.
In-depth tours of the museum and the Jewish quarter were scheduled as were relaxing joint excursions to the region. People from Hohenems and its surroundings joined in discussions on family history and the trauma of National Socialism, about the Jewish present and the handling of historic heritage. The visit to the Jewish Cemetery and a joint Kiddush in the former synagogue with Rabbi Lisa Goldstein and Cantor Marlena Tänzer were among the highlights. In the framework of a Hohenems service, Father Francis Wahle-Brunner reminded the audience in the parish church of St. Karl that these days we were lacking openness toward a new religious minority, Muslims. Two festive evenings framed the meeting: One at the Hohenems Palace with addresses, among others, by Luisa Jaffé-Brunner and Pierre Burgauer. The other at the former Rosenthal plant, today’s Otten Gravour, where, among others, Sue Rosenthal-Shimer, Uri Tänzer, and Michael Köhlmeier gave talks.
While the genealogy database and the museum’s archive were open to the descendants for their inquiries during the meeting, a lot of new information and documents found their way into our collection as well. The 2008 Reunion deepened the relationship between the Hohenems Diaspora and the Jewish Museum as well as the region’s inhabitants. Toward the end of the meeting, many participants were already looking forward to future gatherings. The community is alive and growing.

Database
Hohenemsgenealogy ►
This database informs about family networks of the Vorarlberg and Tyrolian Jews and their descendants. Find family traces or help us with new information. 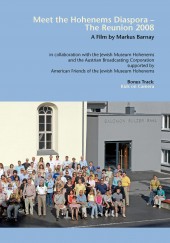