Two streets defined the youngest town in the Vorarlberg part of the Rhein valley for centuries: ‘Christengasse’ (Christians’ Lane) and ‘Judengasse’ (Jews’ Lane).
In 1617, Count Kaspar of Hohenems created the legal basis for the settlement of Jewish families and the construction of institutions within a Jewish community through a ‘charter of protection.’ This was in order to economically stimulate the small market town through Jewish traders. Despite expulsion in the 17th century, a traditionally rich community developed with a cemetery in the southerly part of the town, a synagogue, a school, a care centre for the elderly and poor, and a ritual bath (Mikvah).
The community grew continuously in the 18th century and reached their demographic peak in the first half of the 19th century. While most of the families had to make a living by small trade and peddling as servants and craftsmen, some made careers as merchants and industrialists.
Jews from Hohenems maintained business and family connections to St. Gall and Southern Tyrol, Triest and Frankfurt, Paris and Italy, Vienna, Constantinople  and the US. Families like Hirschfeld, Brettauer, Brunner, Brentano, Rosenthal, Schwarz and Burgauer established textile enterprises and banks, railroads and breweries, bookshops and insurance companies. The community became a hub of their own Diaspora in and around the Alps, in Southern, Middle and Western Europe and in the US.
The Austrian constitution of 1867, which granted Jewish citizens the right to freely choose their place of residence, as well as the new Swiss constitution of 1866 allowing Jews to settle in Switzerland, led many of the Jewish families from Hohenems to migrate to larger towns and cities. By 1935, the Jewish community only amounted to 16 members. These few remaining Jews in Hohenems also felt the effects of the Nazi regime. In 1938, the property of the Jewish community was seized by the municipality. In 1940, the community was forcibly dissolved. The last remaining Jews were initially deported to Vienna and then put into concentration camps and extermination camps in Eastern Europe.

No former member of the Jewish community returned long term thereafter. After the war, Jewish survivors of the concentration camps and extermination camps, the so-called Displaced Persons, lived in Hohenems for a few years, accommodated by the French occupying forces. With this presence, the 300-year history of the independent Jewish community in Hohenems finally enjoyed a short postwar revival. Hohenems is a community from which numerous economic and spiritual impulses arose, especially in the 19th century. Famous rabbis such as Abraham Kohn, a moderate representative of enlightening reforms, and Aron Tänzer, a liberal rabbi and historian, were active in Hohenems. The famous cantor, composer and reform pioneer of synagogue music, Salomon Sulzer, came from Hohenems, as did Eugen Steinach, the renowned scientist, and the New York bookseller August Brentano. The families of Stefan Zweig, Jean Améry and Regina Ullmann had their roots here.

In Jewish rural communities, religious tradition was a considerable factor in the image of the community up until, and well into, the 19th century. Next to the Sabbath, the weekly day of rest on Saturday, and the services in the synagogue, the annual festivals and festivals of life  made Jewish religiousness palpable for the Christian majority. Hohenems though, strongly connected with the urban and metropolitan centers by marriage migration, tended towards reform and liberal Judaism as early as in the 1820s.

Jewish life in Hohenems was multi-layered: rich merchants and poor salesmen lived here, large factory owners and lowly manual labourers. Their cohabitation with the Christian majority was often characterised by friendly cooperation. However, this relationship increasingly turned into exclusion and discrimination, which became stronger with the rise of anti-Semitism as a political weapon towards the end of the 19th century. Paradoxically, that happened when the Jews achieved their emancipation and most of them left Hohenems for good.

Houses in the Jewish Quarter ► 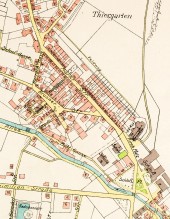