Beginnings
The Jewish Museum Hohenems opened in the Heimann-Rosenthal villa, located at the center of the former Jewish Quarter, in April 1991. However, deliberations concerning the establishment of a Jewish museum in Hohenems had been going on since the 1970s. In 1983, the City of Hohenems purchased the Heimann-Rosenthal villa, once built by a Jewish industrialist family, and contemplated its possible usage. At this point, the founding of a Jewish museum became within reach. Concerned citizens, interested in both an openminded political culture and in history, established the “Association Jewish Museum Hohenems“ in 1986; their aim was to pave the way for presenting Jewish history as well as Jewish life and culture.
Finally, in 1989, Kurt Greussing was commissioned to develop a museum concept for the villa—restored by Roland Gnaiger—that would illustrate the Jews’ history in Vorarlberg from the vantage point of a minority-majority relationship. Participating in its implementation were, among others, Karl Heinz Burmeister, Bernhard Purin, Eva Grabherr, Sabine Fuchs, and members of the Malin-society and the Hohenems Kulturkreis. Together with architect Elsa Prochazka and graphic designers A&H Haller, they deliberately structured the museum as a “walk-in book,” which, to a large extent, presented written testimonies of the community’s history.

New permanent exhibition
In April 2007, the new exhibition and the technically upgraded and air-conditioned building became accessible to the general public once again. The altogether newly designed permanent exhibition presents areas of conflict in Jewish life by focusing on an exemplary local history and on the space in which it unfolds. Faced with visitors’ questions, the exhibition unfurls the concrete reality of life in the diaspora against the backdrop of a European history characterized by migration and cross-border relations, networks and globalization. It places people in the foreground, their idiosyncrasies and subjective experiences, their life plans and customs: people like Salomon Sulzer, pioneer of modern European synagogal music, as well as peddlers and innkeepers, rabbis and teachers, merchants and industrialists, such as the Rosenthal family, in whose villa, built in 1864, the museum resides.
Since the museum’s opening, it has gathered a comprehensive collection of everyday objects, memorabilia, and personal documents—not least thanks to the close contact with descendants of Hohenems Jews around the world. Modern audio guides and video stations now enable new access to a “history of experiences,” available in German, English, and French and thus prepared to welcome an international public. A dedicated children’s exhibition by Monika Helfer and Barbara Steinitz offers a new look at history and stimulates dialogue between the generations.
The new exhibition’s architecture by Erich Steinmayr and Fritz Mascher, the design by stecher id, and the concept consciously transform the former residence into a museum: a space for discourse, in which we are able to perceive the old villa itself as an exhibit. Thus, the Heimann-Rosenthal villa has become a place that enables us to approach the manifold stories and objects and to consciously experience ourselves as “observers”—a place to encounter the past that nonetheless relevant today. 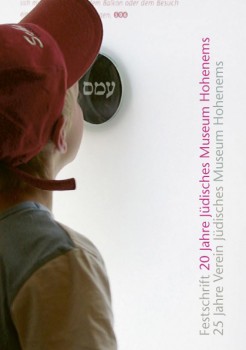