In the late 18th century, laws and regulations in the spirit of the Enlightenment opened the way towards equal rights for the Jews and other minorities. Assimilation, however, was the precondition for their gradual admission into society.

The Edict of Tolerance of 1781/82 improved the legal position of Jews in Austria, but also curtailed their autonomy.

Bavaria – with the backing of its powerful ally Napoleon – ruled Vorarlberg and Tyrol from 1806 until 1814. For the Jews of Hohenems, this meant a decisive further step towards equal rights. A prosperous bourgeoisie began to emerge – gaining education, success, social standing and political influence.

The Enlightenment provoked a reevaluation of tradition in all religions. Progressive German-speaking Jews started to consider reforms to their religion and liturgy. The cantor and composer Salomon Sulzer, who was born in Hohenems, played an important part in this movement. Secularization and acculturation contributed to the integration of Jews into the majority Christian society. Many Jews cast off their religious traditions. next ► 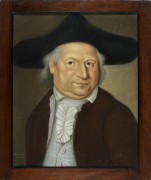