Deutsch HomeVisitor InformationNewsletterPressFriendsCaféShopImprintFacebookYouTubeInstagram
Salomon Sulzer
"A place of pilgrimage for my descendants ..."

Salomon Sulzer was born in Hohenems in 1804. After studying in Alsace and Karlsruhe, he was appointed cantor in the synagogue of his hometown at the age of sixteen. In 1826, he received an appointment at the Stadttempel synagogue in Vienna. Together with the preacher Isak Noa Mannheimer, he developed the “Viennese rite,” a moderate revision of the liturgy and of traditional synagogue music.

Sulzer’s beautiful baritone voice soon brought him fame well beyond the Viennese Jewish community and the city. Franz Schubert composed a version of Psalm 92 for him. Sulzer performed in Vienna with Franz Liszt. Non-Jews came to the synagogue to hear him sing.
Sulzer’s main work was Shir Tsi’on—Song of Zion—a compilation of his versions of Jewish hymns—some, for the first time, with four-part choral accompaniment. Sulzer’s reforms influenced liturgical practice in many synagogues. But he also composed secular songs, setting poems by Goethe to music and writing songs to mark the revolution of 1848. Salomon Sulzer died in Vienna in 1890 and was buried there, in a grave of honour in the Central Cemetery. next ► 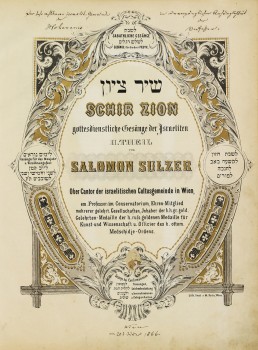