Aron Tänzer was born on January 30, 1871 in Hungarian Pressburg. His father was a rabbi, his mother worked as a plain seamstress for the Pressburger Jewish community. At the age of 21, Aron Tänzer enrolled at university in Berlin. He studied philosophy, as well as Germanistic, and Semitic language and literature. Like many of his contemporaries, he achieved a comprehensive Jewish-Occidental education. After he received his doctorate, Aron Tänzer concentrated his efforts on becoming a rabbi. In October 1896, he successfully applied for the vacant position of rabbi in Hohenems. The Jewish people living in other communities in Vorarlberg and Tyrol also belong to the Israeli cultural community of Hohenems.

His extensive education on the history of thought brought him into both the area of numerous scientific publications as well as adult education. He often held lectures about history and literature for the ‘Bildungsclub Hohenems’ (Hohenems educational club). In 1905, he published ‘Geschichte der Juden in Hohenems’ (The history of the Jews in Hohenems), which is still valid today as a standard work. His attitude was characterised by liberal ideas and cultural openness. He had a close personal friendship with the mayor of Hohenems at that time, August Reis.

Tänzer left Hohenems in 1905. After a short time as a rabbi in Meran, he applied for the advertised position of rabbi in Göppingen, which he attained on September 1, 1907 and held until his death in 1937. Shortly after the breakout of World War 1, Dr. Aron Tänzer registered voluntarily as an army rabbi in the field of combat. He served three years as an army rabbi on the eastern front. ‘As a man of peace within the walls of war’ as he once described himself, he cared pastorally for the soldiers, helped in the military hospital and arranged ‘soup kitchens’ for the suffering inhabitants. For his service in the field, Dr. Aron Tänzer was honoured many times and awarded with various medals.

Dr. Tänzer died on the 26th of February 1937. There was no notice of his death publicly. No obituary or announcement of his death appeared in the newspaper. Dr. Tänzer left a wife and six grown children. His widow was deported to the Theresienstadt concentration camp in 1942. She died there on September 25, 1943. The children, who were already grown, had left the family home after the death of their father. Fritz was a businessman in Tel Aviv; Irene lived in Budapest; Hugo worked as a businessman in Vienna; Ilse lived in London; Paul was a lawyer in Stuttgart; Erwin still studied in Berlin. They all survived the era of the Nazi regime. 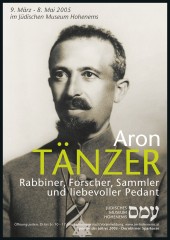