Around 1900, a Jewish immigrant, Emil Berliner, changed the world. With the invention of the grammophone and the record, the first medium of a global culture was born. And the Jewish century found its expression on shellac and vinyl—from the introduction of synagogal music into the Jewish middle-class home to the reinvention of Jewish folk music; from the career of Yiddish theatre songs on Broadway to the rebels of punk.
The history of shellac and vinyl is also a history of Jewish inventors, musicians, composers, music producers, and songwriters. Their music—the sound of the 20th century—was not always „Jewish“ music, but still a product of Jewish experience. Jukebox. Jewkbox! takes you on a journey of discovery through unfamiliar worlds of popular culture, accompanied by personal stories about records that have changed many a life.

Catalog accompanying the exhibition in the Jewish Museum Hohenems from October 19, 2014 to March 8, 2015. 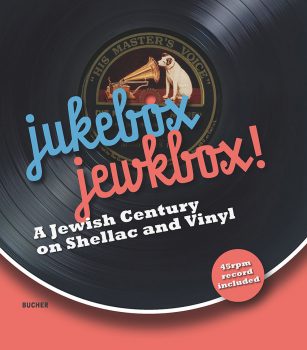