Lazarus Josef Levi was born in Hohenems on November 17, 1743 as son of Josef Wolf Levi and Maria Koschel Moos. His father had been a successful merchant, and Lazarus Josef Levi continued in his path. His mother was the sister of long-term head of the Jewish community Maier Moos, during whose term the Hohenems synagogue was built in 1771. Lazarus also followed successfully in the latter’s footsteps. He would hold the office of Hohenems Jewish community head from 1785 until his death in 1806.

Aron Tänzer writes about Lazarus Josef Levi extolling him as “great, noble, broad-minded, charitable: that is, truly Jewish in everything he undertook” (Tänzer, p. 326). And he described him as a devout and profound Talmud scholar and owner of an extensive and thematically varied library, a sponsor of charitable institutions (such as the foundation for the poor, which he established in 1803), and as a man held in high esteem by the political authorities. In 1795, he was awarded title and privileges of a court Jew, which provided him with numerous advantages not only in his capacity as merchant, but also as community head: ease of travel and sojourn in the entire monarchy and access to the circle of leading Jewish families in the German-speaking areas. He himself was married to Judith Daniel of Frankfurt am Main; they had ten children. His brother Michael Levi went to Randegg (near Gailingen at the Upper Rhine), assumed the name of Neumann, and became community head of the rapidly increasing Randegg community; there he eventually attained sovereignty over the land (Grundherrschaft).

Lazarus Levi in Hohenems was succeeded as community head by his son Josef Lazar in the turbulent years 1809 to 1814, while his son Moritz joined one of southern Germany’s most important merchant families through his marriage to Klara Ullmann of Augsburg.

We know quite a lot about the family’s commercial activities and relationships, educational careers and cultural interests. This is thanks to a considerable discovery of letters in the family’s residence on Israelites’ Lane in Hohenems (containing both private and business correspondence), a surviving book catalog of their private library, and various official and court records in Hohenems and South Tyrol. The documents from Bolzano, mainly from the archives of the mercantile court, reveal that Lazarus Levi was rather active in long-distance trading across the Alps and that he would regularly visit the Bolzano trade fairs as well as other trading venues. Together with his older brother Hirsch, he managed the trading company “Hirsch and Lazarus Levi Brothers” and was soon among the leading merchants in the Alpine area. They traded in Swiss and southern German textiles as well as in silks, raw products, and colonial goods originating in Italy. Frequently, these were barter deals such as, for instance, the exchange of German and Swiss linen weaves and linen for orris roots (1780) or else textiles for wine from Cyprus (1783). Repeatedly, the Bolzano mercantile court had to rule in disputes when Lazarus Levi would file suits against suppliers of defective goods or when, as creditor, he had to worry about the impending escape of his debtors. He was able, time and again, to assert his claims in court rather successfully. Repeatedly, he also had to stand by relatives in distress, such as the husband of his sister Susanna, the Bolzano merchant Heinrich Hendle.

At the peak of his career, Lazarus Josef Levi passed away on October 4, 1806 in Hohenems at age 62. 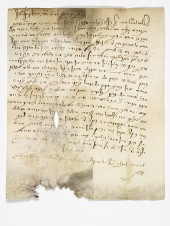