Deutsch HomeVisitor InformationNewsletterPressFriendsCaféShopImprintFacebookYouTubeInstagram
To Remember or Not to Remember
„not particularly friendly to Jews ...“

After 1945, Austria liked to see itself as Hitler’s first victim. Few people were willing to tackle the problem of anti-Semitism or consider inviting back those who had fled. A wall of silence was erected, while the Nazi past and the destruction of the Jewish heritage were ignored.

After the war, a new Jewish community was founded in Innsbruck, which was at the time in a French occupation zone. As legal successor to the pre-war community in Hohenems, it was asssigned that community’s property, which had been confiscated, and then sold it to the municipality of Hohenems. The Austrian authorities, however, had no interest in returning stolen property or paying financial compensation to those who had been persecuted, let alone in issuing an apology.

It was former members of the Jewish community and their descendants who kept alive the memory of Hohenems’s Jewish history. In 1954, they took over the Jewish cemetery and established an association to look after it. In Hohenems in the 1970s, efforts began to recover the history of the Jews of Hohenems. The idea of a Jewish museum was born.

When Kurt Waldheim ran for the Austrian presidency and won in 1986, public debate began about the active part Austrians had played in the crimes of the Nazi Third Reich. It was not until 1991 that chancellor Franz Vranitzky became the first Austrian leader to publicly acknowledge guilt for the country’s Nazi past.

Even today, the way Austrian society and Austrian politicians deal with the Nazi past is marked by taboos and conflicts, anti-Semitic prejudices and many unanswered questions.

Home | Exhibitions | Permanent Exhibition | To Remember or Not to Remember 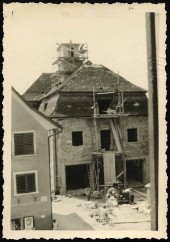 Conversion of the synagogue into a fire station in 1954/55