Deutsch HomeVisitor InformationNewsletterPressFriendsCaféShopImprint
Settlement and Economic Interests
"Why Are We Here?"

Economic factors often played an important role in the complex history of the settlement and displacement of Jews in Europe.
Jewish communities were established around Lake Constance in the Middle Ages. They were only tolerated and remained dependent on the will of the rulers.
Jews were only allowed to be merchants or moneylenders, which often made them the targets of Christian animosity and aggression. During the Black Death, the bubonic plague epidemic of 1348 and 49, anti-Jewish agitation and pogroms led to the end of the Jewish presence in many places – these first communities were driven away or murdered. Many communities from Basel to St. Gall were destroyed. The Jews that survived were scattered, alone or in small groups, across the countryside.
In the seventeenth century, the political and economic ambitions of the (Imperial) counts of Hohenems led to the establishment of a Jewish community here. As of 1617, Jewish merchants and their families were allowed to settle in Hohenems. The count hoped they would increase the volume of trade – or, as it was formulated back then, “elevate the market”.
When the local ruling dynasty died out in 1765, Hohenems became part of Habsburg Austria, and thus was subject to its anti-Jewish laws. Still, the Jews of Hohenems retained their residency rights and the community continued to develop. next ► 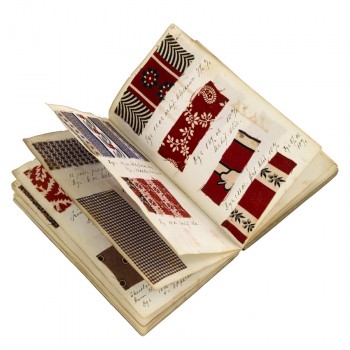 Notebook of Arnold Rosenthal, with samples of fabrics