Deutsch HomeVisitor InformationNewsletterPressFriendsCaféShopImprintFacebookYouTubeInstagram
National Socialism
"327 years there has been Jews in Hohenems ..."

Austrian Nazis took power in Austria on March 12, 1938. German troops marched in. The Nuremberg race laws applied here too, starting in May 1938. That was the beginning of a process whereby the Jews were stripped of their rights, barred from most professions, schools and universities, robbed of their property and, ultimately, of their lives.

Jews, the Nazis’ political opponents, Sinti and Roma, homosexuals and Jehovah’s Witnesses were persecuted and murdered, for the most part with widespread support among the rest of the population. The disabled and the mentally ill were murdered in medical institutions, or were sent off to their death from hospitals like the Valduna in Rankweil. In 1938 there were fifteen Jews still living in Hohenems.
Of all the states in what had been Austria, Vorarlberg had the highest proportion of Nazi party members. In Hohenems, the mayor, Josef Wolfgang, was eager to do the bidding of those now in power.
The Second World War began in 1939 when Germany attacked Poland. Thousands of forced laborers, mainly from Eastern Europe, were put to work in Tyrol and Vorarlberg in agriculture and industry, in armaments factories and in the construction of power stations.

After initial military succcesses, by 1942 it was becoming clear that the German Reich would fall. Resistance to Nazism found little support among the population here. About eighty political opponents of Nazism from Vorarlberg including Johann August Malin and Karoline Redler were executed or perished in concentration camps, many others were imprisoned.
In the beginning of May 1945, Tyrol and Vorarlberg were liberated by American and French troops. next ► 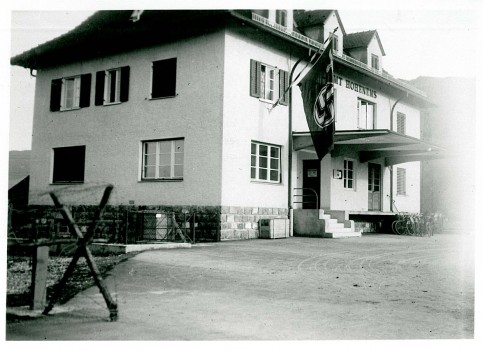 Customs office at the border in Hohenems, about 1942