In the second half of the 19th century, common interests, prosperity and bourgeois self-confidence meant the Jews of Hohenems played an increasingly important part in everyday life in the market town.

The Jews remained at a disadvantage in the political life of Hohenems. As a compromise they were permitted in 1849 to establish their own political community with limited rights. Jews were allowed to take part in clubs and societies in Hohenems, both of a cultural and charitable nature. The Jewish and the Christian choral society merged for some years. And in the early 20th century, Jewish families contributed significantly to the construction of the municipal hospital.
Around 1900, growing anti-Semitism forcefully made itself felt in Vorarlberg and Tyrol. Anti-Jewish prejudices and traditional Christian hostility to Jews became central themes of a political agenda that promised world redemption.
Very few Jews still lived in Hohenems. Most had long since left. It was, as Theodor Elkan wrote in 1931, “a very small Jewish community, which lived on its memories.” Elkan was the community’s last chairman.

Conflicts became more extreme, in Hohenems as well as all of Austria. Friendship between Jews and non-Jews became more difficult as calls to exclude the Jews became ever louder. next ► 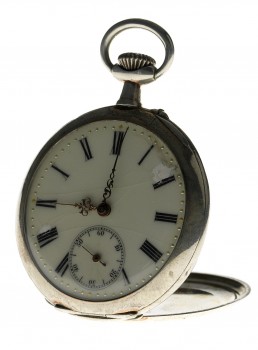 Pocket watch of Harry Weil
from the First World War