Deutsch HomeVisitor InformationNewsletterPressFriendsCaféShopImprintFacebookYouTubeInstagram
The First Europeans
Habsburg and Other Jews – A World before 1914March 25, 2014 – October 5, 2014

A hundred years after the onset of World War I, the European Union faces a severe crisis. The Jewish Museum Hohenems looks back onto the world of the “Habsburg Jews” and their experiences, their transnational networks and their mobility, their hopes for a European federation and their illusions about the Habsburg “commonwealth.” The exhibition presents precious loans from museums and private collections in Europe and the US—and tells the story of merchants and carriers, inventions and white slavery, artists and salons, peddlers and scholars, spies and patriots.
We unfold the panorama of an empire that perished, from the late Middle Ages to 1914. In the end, more than 400 Jewish communities existed on the territories of the Habsburg Monarchy, mirroring the diversity of the empire. For a long time, however, Hohenems was the only recognized Jewish community on what is Austrian territory today, apart from the once Hungarian Burgenland—until 1867, when the new constitution allowed Jews to enter society, and modern anti-Semitism became the paranoid ideology of Europe.
In this world before 1914, Jews were the most active mediators between cultures and regions. Their mobility and their cross-border relations made them the dynamic element of European development.
The members of these communities were as diverse as one can imagine. They were composed of monarchists and revolutionaries, of the pious and the enlightened, of rural as well as urban Jews, of poor individuals and successful ones, of traditionalists as well as fighters for equality and social justice, of feminists and utopians. Yet, what they all had in common was a pre-European reference system.
Their biographies and the objects that form their heritage reflect all aspects of a past, disappointed, and abused, yet—a hundred years after the onset of the “European Civil War” —still full of vibrant European hope. 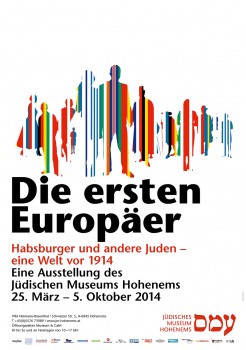