There are more Jews living in New York than in any other city in the world. Michael Melcer and Patricia Schon, Berlin artists with Augsburg backgrounds, went on a journey through this “most Jewish city” of the US in 1999 and 2000. They enjoyed the diversity of Jewish life, the relaxed coexistence of various religious orientations and geographical descents, and the pluralism of cultural traditions.
They wandered through Williamsburg, Crown Heights and Midwood, the orthodox quarters of Brooklyn, the Lower East Side of Manhattan with its Eastern European immigrant traditions and the more “Central European” Upper West Side. They discovered a Syrian Jew offering Mexican Food, a South Korean, selling the best Matzo-Ball-Soup of the town, an Israeli who produces Tiramisu in his chicken bakery.

In photographs, texts and interviews, they covered this fascinating mixture of culinary traditions and habits: Food as an expression of cultural heritage and permanent innovation, a seemingly innocent way of mixing and integration, and still keeping some of the ancient laws, a way to combine unity and diversity.

The exhibition portrays the world of Jewish food, their well known and their surprising features, their exotic and their everyday life hardships.
It tells about how to deal with the rules of kashrut, keeping cultural identity and developing a new one, the arrival in a new, strange world and about accommodating and feeling home.
The world of Jewish food shops might be known to the fans of the films of Woody Allen and Billy Wilder, as a familiar film set. In the words of Melcer and Schon they are “the best, this city has to offer: diversity. An abundance, offering anybody, who comes and is able to stay, a corner to fit in. The pattern, you have to live in, is wide enough to allow individuality, and fine enough to keep you grounded.” 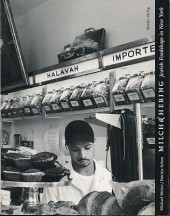