An exhibition celebrating the Recruitment-Treaty between Austria and Turkey signed in 1964. A joint project by “okay.zusammenleben”- Project-coordination office for Immigration and Integration together with the Jewish Museum Hohenems

In 1964 Austria signed a Recruitment-Treaty with Turkey concerning work-force. Two years earlier a similar treaty had been signed with Spain which had hardly any effects. In 1966 an agreement was signed with the Republic of Yugoslavia. The boom in Western Europe had led Austria into the situation where there was a demand for man–power. This was to be covered by workers originating from economically weaker countries such as Turkey and the Republic of Yugoslavia.

In the past decades Vorarlberg was an important destination concerning work-migration. Today Vorarlberg has the second highest share of foreigners in relative figures in Austria. This reflects the province’s significant industrialization that has led to many changes but has also been decisive in contributing to its present prosperity.

The exhibition:
The exhibition presents Vorarlberg’s migration history of the last decades, starting with the works of photographers originating from Vorarlberg and one photographer from Switzerland: Arno Gisinger in cooperation with August Fleisch, Michael Guggenheimer, Nikolaus Walter and Rudolf Zündel.

In the permanent exhibition of the museum documents on the Jewish history of the place will be moved aside a little in order to make room for documents and photographs from the four private archives of Yilmaz Yerit, Elizabet Hintner–Caliskan, Erich Brüstle and Ali Gedik, who all depict Vorarlberg’s migration history from their own specific biographical point of view.

In addition to that, the permanent exhibition on the history of the Jews of Hohenems will be commented on through key objects from the most recent migration period and thus an interesting connection between the past and the present time will be established. 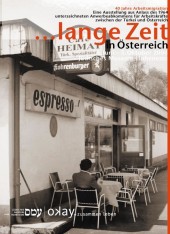 The program (pdf in German) ►