In the late 19th century, a German-Jewish immigrant to the USA changed the world. With Emil Berliner’s invention of the gramophone and the record, the age of mass entertainment found its first medium. The first global culture spanning the world was born.

Over a time period of one hundred years, shellac and vinyl were the sound carriers of popular culture. On them, all the experiences of the 20th century, its utopias and catastrophes, illusions and hopes condensed. The record, mass produced and guided by collective taste, was at the same time an expression of individual identity and an object of ritual. Jewish experience of the 20th century, too, found its expression on records, from the transformation of synagogal music into middle-class art appreciation to the reinvention of Jewish folk music and the career of Yiddish theater songs on Broadway to the punk rebellion against pop music.

The history of humankind’s first global medium is also a history of Jewish inventors, Jewish songwriters, composers, music producers and musicians. Their music, the omnipresent sound of the 20th century, its best-known songs, musicals and soundtracks were not always “Jewish“ music—but always also a product of Jewish history and experience.

Jukebox. Jewkbox! presents this history from the first gramophones and shellac records to the dissolution of this medium in the age of the World Wide Web. It is a journey of discovery through some all too familiar as well as numerous unfamiliar worlds, accompanied by personal stories about records that have changed many lives. 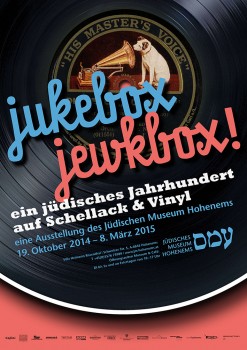