Deutsch HomeVisitor InformationNewsletterPressFriendsCaféShopImprintFacebookYouTubeInstagram
Jewish „Kitsch“ and Other Secret Obsessions
Identity Shopping, God in Detail and the Desire
for the Objects of HappynessMay 29, 2005 – October 8, 2005

Since 2001 Michael Wuliger has presented his Shlock Shop in the Jüdische Allgemeine weekly in Berlin, an ironic statement about Jewish Kitsch and commodities from the Internet. Together with him we surfed in the World Wide Web, went shopping in duty free shops and souvenir stands and presented our fine choice of Jewish contemporary objects, between secular dreams and ritual tradition, while searching for god and identity.

Jewish Kitsch @ Hohenems
The world of Jewish Kitsch today is best explored on the Internet and in souvenir shops. Jewish objects promise identity in a Diaspora that did not cease to flourish after the rise of the State of Israel.
Kitsch seems to be a promise of luck that maybe doesn’t come to us in this world, but at least can be represented. The kitsch of the Diaspora represents our bonds to a tradition, that has become a secular, cultural one for many of us, but is still based on the religious laws and the history of a people. And it represents our relation to the utopia that is called Jerusalem. “Next year in Jerusalem” one says every year on Pessach. But this Jerusalem does not exist in the Near East of today, but in our dreams.
Over a hundred years ago, particularly in the US, the focus of immigration as such, a market for Jewish products emerged on the scene, a market that offers all kinds of ritual objects and educational toys, ironic and kitschy keepsakes, and the every day equipment for a more or lesser kosher way of life.
After the catastrophe of the Shoah, the crime of the 20th century, Jewish tradition has become the subject of nostalgia, not only by Jews. And the longing for identity moves everybody in a modern world of mobility and migration, of global exchange and the search for “authenticity”, that again and again lead into conflicts and wars.
The Jewish culture is rich of rituals, which, along with its objects, are performed mostly at home, creating an abundance of identity objects that you can find in every Jewish household, be it religious or not. Only a minority sticks to the laws of Kashrut and religious tradition in a literal sense. But still the material heritage representing these traditions is meaningful to most of us.
Thus the field of contemporary Jewish objects is a world to explore the productive process between religious traditions and secular culture, and the ironic twist that make some of them a provocative comment about the contradictions of Jewish life today, between old myths and new challenges.

Jüdisches (Jewish Things)
The Frankfurt based photographer Peter Loewy has portrayed Jewish things, ritual objects and keepsakes, artifacts and objects of memory, little collections and “arrangements”.
Thanks to the confidence with which he was welcomed, he could stride through the private world, the homes of Jews living in Frankfurt today. What we see – on shelves and tables, in boards and show cases, on walls and doors – are the markers of identity, still life and a little paradise, kitschy and ironic, nostalgic or melancholic. Like a child we search for the “Jewish” things in the Puzzle of every day life, of all kind of objects and sentiments: a magic landscape of privacy. Peter Loewy, born 1951 in Israel, turns to the objects of wishes and dreams, the world of Kitsch, food culture and commodities, of material self-representation in many of his photographic projects. Living in Frankfurt he publishes most of his projects with Kehayoff Publishers in Munich, such as his Bagel book or his project about window shopping in Paris. He is currently working on a project on artist’s studios.

Feinkost Adam (Adam’s delicatessen)
in the museum’s parlor
The Berlin based Jewish artist Anna Adam attacks prejudices and clichés about Jews, with an ironic slant and a lot of good humor.
The satirical project Feinkost Adam TM takes all your senses: you can see it, you can smell it, you can touch it, you can hear it, you can taste it. For the Jewish Museum Hohenems Feinkost Adam has prepared new offers – find them in our shop and buy. Anna Adam, born 1963 in Germany, studied art and education in Düsseldorf and is a member of the Diasporic artists group Meshulash in Berlin. Various exhibitions in Germany and abroad. Her controversial project Feinkost Adam TM, started in the Jewish Museum of Fürth years ago, made her one of the best known Jewish artists in Germany.

… and other secret obsessions
Hidden in the drawers of the Museum’s permanent exhibition showcases we present collections of friends of the Jewish Museum: fetishes and talismans, smoking pipes and art, Judaica and Islamic postcards, historical documents and the chaos in kitchen drawers, all kinds of collecting activity human beings perform in their every day life. 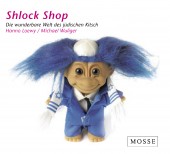 The catalog (in German): 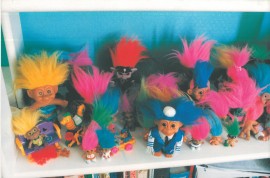 The program in German (pdf) ►