For the past three years, a controversial streetcar has been connecting Jerusalem’s west with Jewish settlements in the city’s Palestinian eastern part. In it, Orthodox Jews and secular Israelis, Palestinians and pilgrims, townspeople and tourists meet. It is a reflection of today’s volatile situation of Jerusalem’s urban society.
The exhibition “A Streetcar Named Desire. A Journey through Yerushalayim/Jerusalem/Al Quds” takes its visitors on a journey through the city that Jews, Christians, and Muslims consider holy. A city that people from all parts of the world claim for themselves, and in which all conflicts of the past and present have their place.

In Jerusalem, the most varying groups live in tight vicinity, oftentimes in quarters that are closed off from each other, surrounded by walls or barbed wire fences. In between, the religious tourists are accommodated in special pilgrim hostels and hotels. Still, they meet—in markets and in shopping malls, in hospitals and parks, and, not least, on the street. Everyone casts their own net of interpretation over the city while blocking out the others or denying them their right to exist. Pilgrim groups walk through the city as if through a projection area of their holy accounts.

With the streetcar, we move through the various “Jerusalems” that exist next to each other and against each other, often in the same place, mutually obscuring each other. We drive through ruins of past utopias and along numerous monuments to the symbolic and political appropriation of this city.

For this exhibition, the Israeli artist Galia Gur Zeev has explored and traversed the city: station after station along the route of our exhibition streetcar. She has photographed places where diverging historical or contemporary religious and national interpretations rub against each other. Her images are a documentary gaze at the city combined with a sensitive and critical subjectivity: pictures of splendid sights and dilapidated houses, of walls and fences, and of bleak and controversial areas.

The streetcar’s route is lined with places that have ignited and keep igniting the city’s conflicts. Each site has its own stories and represents a different area of tension. This streetcar through Jerusalem has been controversial from the start, with the route itself a political issue. Politicians maintained that it connects the city’s eastern and western parts and its various groups of inhabitants. However, its actual planning was concerned with the Jewish settlements in the east of the city and not with the Arab parts of the city it passes through.

Yet, for many of the city’s inhabitants, independent of their origin or religion, it has also become a carrier of hope; after all, it represents an ardent desire that many Jerusalemites harbor for their city: the desire for normalcy.

At least “our“ streetcar could perhaps drive toward such “normalcy“—toward a station where, to be sure, the differing interpretations of the city will not fuse, but would still be able to tolerate each other. However, this “Streetcar Named Desire” has not reached its final stop yet. Alas, it is still far from there. 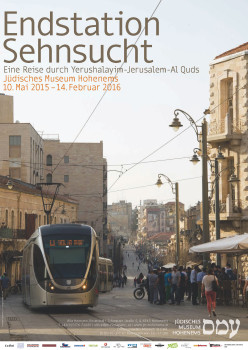