Salomon Sulzer was born in 1804 in Hohenems. After a period of study in Karlsruhe and France, he attained the position of choirmaster at the synagogue in Hohenems at the age of sixteen. In 1826, he was appointed to the newly erected Viennese city temple where he founded the ‘Wiener Ritus’ together with the preacher Isaak Noah Mannheimer. This was a moderate type of reform which was accepted by both renewalists and traditionalists alike. Sulzer was also soon known outside Viennese Judaism as a striking personality and his wonderful baritone was known well beyond the city limits. The composers Franz Schubert, Franz Liszt, Giacomo Meyerbeer, Robert Schumann and Niccolo Paganini were among his many admirers and friends who often visited the Viennese city temple to hear Sulzer.

Sulzer’s main compositional work, which also shaped his reputation as a reformist of synagogue singing, is the ‘Schir Zion’ (Voice of Zion) which was published in two parts with the major part being self-composed works for use in services. The new compositions were written firstly with a four-part harmony choir accompaniment and influenced the style of worship in many synagogues. He compiled the two volumes of ‘Schir Zion’ which included all prayers of the year. This characterises synagogue singing even today. In addition, Sulzer was active as a composer of secular songs. Next to revolutionary songs, he wrote music to poems from Goethe, among others.

Sulzer died in 1890 and was buried in Vienna. His synagogue music still provides the music today for services in the Viennese city temple and they belong to the regular repertoire of numerous synagogues in the United States and Great Britain. 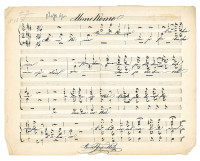 Manuscripts from the estate of Salomon Sulzer