August Brentano was born on December 23, 1828 in Hohenems in the house opposite the synagogue on today’s 6 Schweizer Strasse. His father, Johann August Brentano, was a merchant in Hohenems, ran a grocery store, and was active in the community council. His grandfather Nathan Elias, who had moved from Schwabach in Bavaria to Hohenems around 1770, had established himself here successfully as a textile merchant and later on with a cotton spinning and weaving mill and was elected head of the Jewish community. This position was so unpopular, particularly in times of war, Bavarian rule, and Tyrolean Rebellion, that Nathan Elias asked in 1809 to be released from office, albeit to no avail. Moreover, he was forced to pay considerable sums to the Tyrolean rebels to prevent them from attacking Jews before going to battle against the Bavarian-French army. Yet, this patriotic generosity displayed by Nathan Elias and other Jewish merchants was not accompanied by any resounding success in this regard.

August Brentano, on the other hand, was born in quieter times. But as the youngest son, he had no chance of inheriting the family’s business and right of residence. He immigrated to the USA around 1853 and started out as paper deliverer. Soon thereafter, he opened a newsstand in Boston in front of the Revere House, one of the city’s historical landmarks. Then he moved to New York, where he again opened a newsstand of his own in front of the New York Hotel. Soon he began offering not just American, but also imported European newspapers, which turned out to be a great success: in 1860, Brentano was able to open a book and newspaper store in a basement on lower Broadway and finally, in 1868, an elegant store on 39 Union Square, named Brentano’s Literary Emporium. Brentano’s would become not only New York’s largest and leading bookstore, but also a meeting place of the American literati. Among Brentano’s friends were such literary giants such as Charles Dickens and Ralph Waldo Emerson.

In 1877, Brentano, who was unmarried, sold his New York bookstore to the sons (August, Arthur, Simon) of his brother Emil, who had grown up in Cincinnati, but had moved to New York to join their uncle’s business.

His nephews opened a branch in Chicago, which August Brentano would manage until his death. In addition, they established book and newspaper stores in Washington, San Francisco, Philadelphia, London, and, from 1887, Paris. The latter, located on 37 Avenue de l’Opéra, would soon become one of the leading bookstores as well. Brentano’s also founded a publishing house, which distinguished itself with the publication of French literature for the American market.

August Brentano passed away on November 2, 1886 in Chicago. He was buried in New York City at the Cypress Hills Cemetery. The architecturally sophisticated bookstore on Manhattan’s posh Fifth Avenue would for a long time remain the visible memory of the Brentano family until its closure in the 1990s.

In 1962, Brentano’s was acquired by the Crowell-Collier Publishing Company, in 1985 by Waldenbooks, and later on by Borders. Today, only the bookstore in Paris continues to be in existence, still at the same location, under the name Brentano’s, owned by an Iranian bookseller. 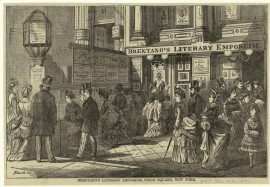